National Geographic has been publishing retail topographic trail maps of North America’s most popular outdoor recreation areas since it acquired Colorado-based Trails Illustrated in 1997. Over the past 24 years it has expanded the Trails Illustrated product family and enhanced its quality, making it the largest and most popular line of trail maps in North America, with over 300 titles and hundreds of thousands of maps sold annually. New titles are published each year, along with updated versions of existing maps. 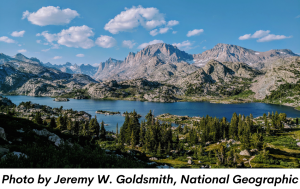 Trails Illustrated maps cover the top national parks in the United States and the Canadian Rockies, as well as major state parks, national forests, and wilderness areas. Coverage is focused on large public lands with extensive trail networks and few paved roads, generally in scenic mountain and desert regions where detailed and accurate topographic maps are needed for navigation and safety.
Less visited than Yellowstone and Grand Teton National Parks to the northwest, but an integral part of the Greater Yellowstone Ecosystem, Wyoming’s Wind River Range (“the Winds” for short) is among the most rugged, remote, and spectacular landscapes of the contiguous United States. Home to more than 40 peaks higher than 13,000 feet (3,962 m), the linear mountain range forms 80 miles (128 km) of the North American Continental Divide. Its abundant wildlife and scenery is protected by two National Forests and three designated Wilderness Areas, covering 728,000 acres (295,000 ha) and making it one of the largest roadless areas in the contiguous United States.
Read the full article
Vishul2021-09-16T02:03:39-04:00September 16th, 2021|
FacebookTwitterLinkedIn