How World War I launched mapmaking at National Geographic 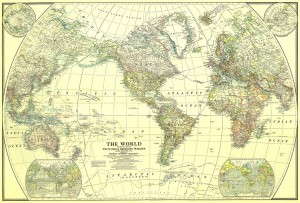 In the summer of 1914, Americans began reading news accounts of a conflict that would soon be called the Great War—and that would draw the United States in three years later. But it was National Geographic’s maps that quickly helped Americans grasp the sweep of a conflict so vast that it would later become known as the First World War.

“People who followed the war at all followed it by reading newspapers…and maps were a very important way to make sense of these faraway places [and] strange names,” says Robert Poole, a former executive editor at National Geographic magazine and author of a book on the history of the magazine.

National Geographic revamped its August 1914 issue to include a map of “New Balkan States and Central Europe,” which featured the names of the places where fighting was most severe. The maps were popular, boosting the organization’s visibility. By year’s end, membership in the Society had grown 50 percent, to more than 336,000.

The Balkans map was ready to go because the magazine’s editor, Gilbert H. Grosvenor, had anticipated heightened conflict after visiting Great Britain, France, and Russia in the summer of 1913, during the Second Balkan War, and had commissioned a map of the area.

By early 1914 the finished copies were delivered to the Society’s Washington, D.C. headquarters. Waiting for the moment when tensions were sufficiently high to pique reader interest, Grosvenor stored the maps in the Society’s basement until war broke out that summer.

“He had a sixth sense for what readers were interested in,” Poole says. “He could tell that something important was happening in Europe, that Europe was changing very quickly, that people needed this sort of information that they weren’t getting anywhere else.”

“There was this niche that National Geographic could fit that no one else was fitting,” Poole says. “He began to get favorable responses not only from the public, but [also] from the White House, the Navy.”