The Future of Realtime Intelligence 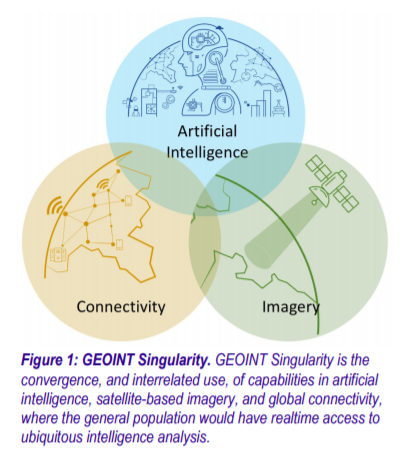 A study by Aerospace Corporation released early this month outlines a future in which “realtime Earth observations with analytics are available globally to the average citizen on the ground providing a tremendous wealth of information, insight, and intelligence.” Coined the GeoInt Singularity, it is hailed as a boon to location-based information intelligence that has the ability to support a myriad of consumer-facing applications – and a concern for military operators and warfighters.

The report’s focus is on the threats to military activity, notably the difficulty in maintaining secret operations on the ground, though it also briefly “acknowledges the privacy concerns of people around the world.” What are the broader implications and of such data being widely available – including night-vision and infra-red imagery?

The potential impact on vulnerable populations around the world could be huge, from the location and tracking of migrants and the homeless to the targeting of racial, religious and ethnic groups and geopolitical ‘adversaries’. The impact of large scale imagery could prove beneficial – or devastating if used for nefarious purposes.

While a GeoInt Singularity may never be reached, it is worth considering both the opportunities and implications of such data intelligence being made widely available.